Skip to content
Loading...
Latest news
Is CBD Addictive? Here’s What Studies Show Us.
What Does The Future of CBD Look Like?
Delta 8 and Delta 9 are not even like comparing apples and oranges. It’s more like a red apple versus a green apple
Sun State Hemp is Proud to use the latest technology for Hemp Oil extraction in the industry.
The Modern Day Superfood, Cannabis.
CBDCBD Education

Delta 8 Moon Rocks are a combination of rich Delta 8 THC and a variety of other cannabinoids, rolled into a one-of-a-kind package for your vaping satisfaction. But what makes a Moon Rock so special? Let’s dive right in on these wonderful nuggets that the hemp world calls ‘caviar’.

What are Delta 8 Moon Rocks?

Delta 8 Moon Rocks are hemp buds that have been infused with Delta-8 THC before being rolled in a cannabinoid-rich hemp kief. These moon rocks look like little hemp-coated rocks, thus the name. They’ve also been called ‘caviar’, given their luxuriousness (though don’t eat them!). In other words, Moon Rocks are a way to combine multiple kinds of cannabinoids or strains into a single product. Truly, we hemp vapers live in wonderful times. 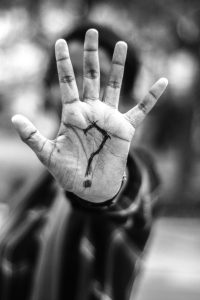 While traditional Moon Rocks were made with cannabis and illegal Delta 9 THC, modern Moon Rocks can be made with hemp-derived cannabinoids. Just wait until you taste the sweet buds of Sun State Hemp’s Delta 8 Moon Rocks. These humble balls of caviar are crafted with premium Delta 8 and rolled in CBG kief for a deeper and more intense experience. We recommend using them with Atmos RX’s VICOD 5G 2nd-Gen Vaporizer. This stylish and hi-performance device, when combined with soothing terpenes like Watermelon Zkittles, will make for a match made in heaven. If it sounds and feels like you are headed to outer space, then buckle up – Moon Rocks can be a beast. 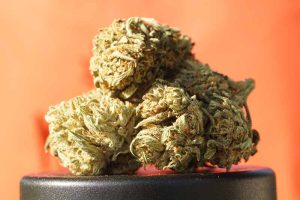 Originally, Moon Rocks were made for connoisseurs looking for a way to elevate their smoking experience. Dipping dry herb from one strain in a distillate, then rolling it in kief from another strain offered new experiences that others soon started replicating. 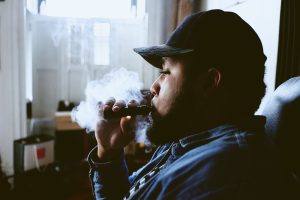 While each cannabinoid is enjoyable on its own, combined they can achieve something divine!

Derived from legal hemp, Delta 8 THC has grown incredibly popular in recent years. Many enjoy the way it helps them to unwind and enjoy a sense of well-being.

How are Delta 8 THC Moon Rocks made?

While the actual origins of Moon Rocks are unknown, it is evident that it began in California in the 1970s. Supposedly it was to help repurpose leftover kief and boost the potency of low-quality cannabis.

Since then, the methods for creating Moon Rocks have evolved past making a Frankenstein’s monster of stitched-together buds. To support the impact of the base strain and distillate, today’s Moon Rocks contain higher quantities of terpenes and cannabinoids. These often include CBG and CBD.

The process begins with organic American hemp that has been hand-trimmed at optimal maturity. The buds are then immersed in a Delta 8 distillate, which infuses the plant while covering the leaves with a sticky outer layer.

The distillate-coated Delta 8 nuggets are then wrapped in a powdered kief of Delta 8, CBD, and other natural cannabinoids. Then, the nuggets are cleaned up, packaged, and sent out.

How do you take Moon Rocks?

Moon Rocks were traditionally enjoy by smokers, but the emergence of new vape technology has changed the game. Vaping Moon Rocks requires some care, but the results can be truly impressive.

Convection-heating vaporizers are the most effective for pure moon rocks. While burning the moon rocks directly can work, convection heating (air heating) will preserve your herb better without losing flavor. You shouldn’t vape Moon Rocks whole – they can be too dense to get flavor from. Instead, pick apart your rock by hand, and get smaller ‘chunks’ from it first. It will pack better, and offer smoother vapor.

If you want to explore more Delta 8 products, just head on over to SunStateHemp.com and discover the latest and greatest in hemp-derived recreational cannabinoids!